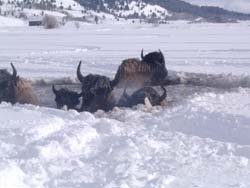 Please click this link to see a video of Yellowstone Bison
falling through ice during hazing operation by
the Montana Department of Livestock
killing some!

The National Park Service has spent seven of the past eight days hazing Yellowstone National Park buffalo near the park's northern border to appease the special interests of Montana's livestock industry and the Church Universal and Triumphant. In 1999 US taxpayers doled out 13 million dollars to the Church in a deal that was supposed to result in greater tolerance for buffalo. But the Church still refuses to allow buffalo anywhere near it's land. On the west side of the Yellowstone River buffalo are harassed with your tax dollars and on the east side they are shot by hunters. Where is the tolerance for buffalo in Montana?

These are Bison that are supposed to be protected in Yellowstone National Park. When does this insanity stop? When will we as a Nation rise up and make our Park Service accountable for their continued atrocities?


Update from the Field January 19, 2006
Buffalo Slaughter in Yellowstone

Dear Friends of the Buffalo,
It is hard to imagine that "Yellowstone" and "buffalo slaughter" would appear together in the same sentence, yet here they are. We have now entered the worst buffalo slaughter since the wicked winter of 1996-97. Buffalo history in America is like a broken record seemingly doomed to repeat itself again and again.

Since last Wednesday, Yellowstone National Park rangers have captured 524 of the country's last wild buffalo. These icons of the American West have been rounded up like cattle and crammed into the Stephens Creek Capture Facility, near Gardiner and Yellowstone's northern boundary. This trap is located inside our planet's first national park. These mighty buffalo, gentle creatures of freedom, strong spirit and tenacious strength, will all be sent to slaughter without being tested for brucellosis antibodies. This is ironic because brucellosis is the supposed reason for the government's lethal actions against wild buffalo. Another irony: The NPS is taking these actions without cooperation from Montana. Yet it is Montana that holds the irrational zero-tolerance policy against wild buffalo, and it is Montana's cattle industry that the Park Service says it's protecting, yet in order to save face while their illegitimate hunt is underway, Montana pretends to disagree with these actions; of course, not enough to denounce them. It is no secret that the Park Service's actions are a boon to the state's cattle industry. If Montana isn't urging this insane action, why is the Park Service conducting it? Another irony is that the native wild buffalo are being escorted to slaughterhouses in Montana and Idaho - as far away as 500 miles - by none other than the Bush Administration's Department of Homeland Security. 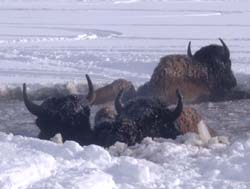 As of this writing, the National Park Service has sent 300 of the last wild buffalo to slaughter; 185 buffalo still remain locked in the Stephens Creek Bison Capture Facility. Thirty-eight wild buffalo calves have been sent to prison at the Corwin Springs Quarantine Facility--joining the 14 who have been confined there since last year--where they will be raised in captivity, experimented on, and the majority slaughtered. On Friday, one baby buffalo died in the trap because while it was being "processed" the Park Service broke off its little button horns.

http://www.buffalofieldcampaign.org/media/bisonhunt/bisonhuntvideo.html
The buffalo suffer government madness for simply following the only law that matters, the Law of Nature. The Yellowstone buffalo are the last ones to follow the awesome instinct to migrate. Yet instead of celebrating this natural phenomenon, the government punishes it. Land of the free? Some buffalo crossed an imaginary line that says "you are awe-inspiring and respected here on this side, but you are vermin and expendable there on that side." Some buffalo never even crossed that illogical, unreasonable, invisible man-made line. The underlying themes are cattle and habitat: wild buffalo are provided zero habitat outside of Yellowstone National Park, even on our national and state public lands because the cattle industry hordes it greedily for fattening beef for the dinner table. Yellowstone has become nothing less than a mega-zoo that engages in the wholesale slaughter of native wildlife to do the bidding of the livestock industry. Money doesn't just talk, it screams. We the People have to scream LOUDER. We cannot let this injustice continue for another ten years. 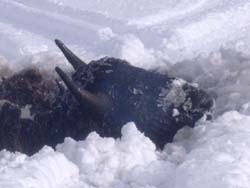 The government agencies that take these monstrous actions are so wrapped up in their nefarious Plan and bureaucratic nonsense that they refuse to see what it is they are doing. They cannot see what we see when we're out in the field with the buffalo, the peace the buffalo bring, the completion they give to the landscape, their natural right to exist as wild, free buffalo. But the people see. And the people must act. As of this writing, Yellowstone Chief of Public Affairs Al Nash, cooly and in good humor, tells us that they may capture another 50 wild buffalo today. Their justification: "It's in the Plan." It's only the last wild herd, after all. It's only Yellowstone National Park. And, it's is only January. Along the northern boundary, the NPS is capturing and slaughtering buffalo as quickly as they can in order to make room for more tax payer-funded murder, while trap sites along the Park's western boundary are being plowed to make way for even more. 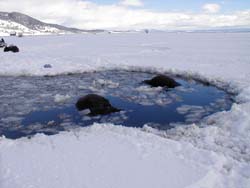 Meanwhile, just miles from Park Service-run buffalo-slaughter, Montana's canned bison hunt goes on. Over the weekend tribal members from the Blackfeet and Chippewa-Cree Indian Nations used their permits here in West Yellowstone. Only three of eight Montana tribes decided to engage in the first phase of the hunt. On Monday, phase II of the hunt began and seven buffalo were gunned down in Gardiner. That same day, just across the Yellowstone River, the Park Service captured 211 wild buffalo. According to an article in today's print-version of the Bozeman Daily Chronicle, 50 buffalo that were shipped to a Nampa, Idaho slaughterhouse from Yellowstone on Tuesday never arrived at that slaughter facility. Their whereabouts remain a mystery. The government doesn't have an answer. 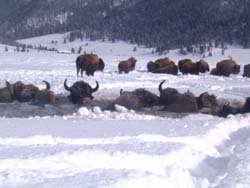 If there is good news to report, it is that last week's ice-hazing catastrophe - when the Department of Livestock hazed 40 buffalo and caused 12 to fall through the ice, drowning two - is getting national media attention. This horrible incident has not gone unnoticed and continues to be a focus of the media and is drawing more and more outrage from Montanans and others across the country. Voices are being raised in defense of the buffalo. The DOL may have sealed their fate in their involvement in wild buffalo harassment with their latest foolish and unnecessary hazing operation. 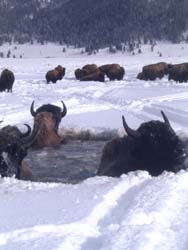 If I were a better writer, by the time you read this email everyone you know would also know about what is happening to the last wild buffalo and each would take appropriate action. I can only hope that these words convey to you a sense of the urgent need to all join in solidarity NOW for the buffalo and take action NOW and UNTIL they are set free. What is happening here in the land of the last wild buffalo, in the land of the earth's first national park is a symptom of the larger illness plaguing our planet. We are the healers. Ours is the voice that must be heard. These are the last wild buffalo ... and once they are gone, they are gone forever. 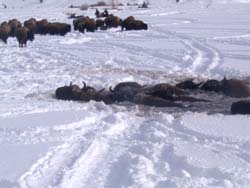 Please take action now, and encourage everyone you know to do the same. If you can join us on the front lines, we need your help. But PLEASE contact Governor Brian Schweitzer (406-444-3111) and Yellowstone Superintendent Suzanne Lewis (307-344-2002) and express your outrage at their zero-tolerance for wild buffalo, their lack of integrity, and their shameful participation in the wholesale slaughter of this gentle and majestic American icon. You might even suggest that the NPS replace their buffalo insignia with a cow, since that is the only thing they seem willing to take a stand for. Shame on Yellowstone, and shame on Montana. These buffalo belong to the country, not to the state or the government, and certainly not to slaughterhouses. We must demand that the buffalo be protected and respected and forever set free. It is high time to stop this senseless harassment and slaughter of the country's last wild buffalo. Enough Is Enough! Save the herd... spread the word. In Solidarity & With Strong Prayer for the Buffalo Nation,
~Stephany
The Buffalo Field Campaign
Visit The Buffalo Field Campaign

We have 24 guests and no members online